Learn how to make homemade pumpkin puree from a fresh pumpkin as well as the best pumpkin varieties for cooking and eating!

Did you know that over 1.3 billion pounds of pumpkins are sent to the landfill every year in the United States? And that number doesn’t even account for the “ornamental” squashes and gourds people use in their autumn decor.

While you may think tossing your pumpkins and gourds is fine as they’re organic matter that will just break down in the landfill, you’d be sorely mistaken. Unfortunately, even organic matter can’t break down if it’s not in the right conditions (you know, like if it’s contained in an air-tight plastic bag).

So what are you to do with all those pumpkins? Certainly not stop buying/growing them. If you have a compost pile/bin, compost them! They’ll become food for next year’s garden. Otherwise, you can find a local farmer who may like the free treat for her livestock, or break your pumpkins open and leave them in the woods for the local deer and other fauna. Do break them open though – otherwise deer can get their heads stuck in them.

Better yet, before composting or giving to the local forest creatures, roast your pumpkin and make your own homemade pumpkin puree!

Homemade pumpkin puree is so, so delicious and so much better than the stuff in the can. It takes some time but no great skill, and you’ll be able to boast come Thanksgiving that your pie really is from scratch. Read on to learn how, as well as a recipe round up for how to use your pumpkin puree bounty.

What is pumpkin puree?

First things first – no silly questions here. Most of us have become so alienated from our food supply that the process of going from pumpkin plant to the mushy stuff in the can is mystifying.

It’s simple, really: pumpkin puree is just pureed pumpkin flesh. You roast the halved pumpkins first to soften them and bring out all the sweet, caramelized notes. Then scoop it out of the skin and into your food processor to blitz up. Voila – that’s what comes in the can.

Of course, homemade pumpkin puree is much sweeter and more flavorful than anything you can get at the store. Totally worth the bit of extra work, especially as we’re looking at another pumpkin shortage this year. If you grew any pumpkins in your summer garden, I’d definitely suggest making your own puree for that pumpkin pie this year.

What’s the difference between pumpkin puree and pumpkin pie mix?

You certainly could do that with your homemade pumpkin puree if you know you plan to use it for pie. Portion into the amount your pie recipe calls for and add in the spices before storing/freezing. I like to leave mine plain, though, so I can easily use it in savory applications like soup as well as pie.

Is pumpkin puree good for you?

It’s so good for you!! Pumpkins, a member of the cucurbit family, are packed with nutrients. On top of being low in calories and fat, it’s high in fiber and vitamins A, C, E, K, and B plus iron magnesium, manganese, potassium, thiamin, niacin, folate, and copper.

And it’s not just good for you – pumpkin is also a great supplement for dogs and chickens!

Which pumpkin varieties are best for cooking and eating?

As always, organically grown is better than conventional. Pumpkins are prone to powdery mildew and other squash maladies, so conventionally grown ones have likely been sprayed with pesticides which not only linger in the fruit but also pollute groundwater.

But, if you can’t afford or access organic, your homemade puree is still going to be more nutritious and delicious than the canned stuff at the store which was also made with conventional pumpkins.

As far as specific species of pumpkins, the classic is the sugar pie pumpkin. These are often what you find for sale at the grocery store in October and November. These are some of the sweetest of all pumpkins and so perfect for your Thanksgiving pie.

But loads of other varieties are great too! Many heirloom pumpkin varieties will have more complex or interesting flavors. The pumpkins in the photos you see in this post are the Long Island Cheese Pumpkins I grew this year. Some other great choices to look out for (or grow next year!):

I wouldn’t recommend using your Halloween Jack-O-Lantern. I know people who have, but it’s not the most flavorful. And if you’ve carved it, definitely steer away – that’s been sitting exposed on your porch for like a week.

How does homemade pumpkin puree compare to the stuff in the can?

As with any fresh vs. canned food, your homemade pumpkin puree will be more nutritionally dense. I also find it much sweeter and more flavorful – especially if you’re making it from an heirloom pumpkin variety.

On the flip side, homemade pumpkin puree tends to be more watery than the canned stuff. You can just plan to decrease the liquid content in any recipes that call for canned pumpkin. But I also have two other methods for combating the liquidiness. One, you’ll see below I call for straining your puree through a cheesecloth for a few hours. Two, you can also just cook your puree and cool it before using it in a recipe. Basically, dump it into a saucepan, bring it to medium heat, and allow some of the water cook off until you hit the right texture. A bonus is cooking it further emphasizes the caramel-y flavors you want in pie. Of course, for something like soup, the extra liquid won’t do any harm.

What’s the difference between pumpkin and squash? Can I make pie out of squash?

I think of it like geometry – you know, squares are rectangles but not all rectangles are squares? Well, a pumpkin is a squash (cucurbit) but not all squashes are pumpkins. Generally, if it’s round, orange, and lobed it’s a pumpkin.

Of course, this gets more confusing as in some countries they refer to all squashes as pumpkins. So they might refer to a butternut pumpkin whereas in the US we’d call it a butternut squash.

All that said, you can make pumpkin pie out of non-pumpkin squashes, just not all of them. If you can’t find a pumpkin, look for a squash with similar flavors/characteristics. For example, I’d expect a butternut squash, a kabocha, or a koginut to all work well. You can follow the same method of pureeing and roasting below, they may just differ in roasting times.

How do you make pumpkin puree?

I’ll go through the full step-by-step in the recipe card below, but here’s how I do it. Cut the stem off your pumpkin with a very sharp knife and then halve it. Scoop out the seeds, guts, and stringy bits (reserving for roasted pumpkin seeds if you like!). Place it cut side down on a parchment-lined baking sheet and poke a few steam holes in the back. Roast at 400ºF for 45-60 minutes. It’s done when you can easily pierce it with a knife.

Allow to cool so you can handle comfortably, then scoop the roasted flesh into a food processor blender and discard the skins. Process until you have a smooth puree. At that point, you can use it just like canned pumpkin! However, I like to put it in the fridge in a cheesecloth-lined colander sat in a bowl overnight. This allows excess liquid to drain off so the homemade pumpkin puree is closer in texture and moisture-level to the store bought, which most recipes are based on. Then I take my biggest cookie tray lined with parchment and apportion half cups of puree. I freeze these then pop them in a stasher bag so I can easily grab and defrost just the amount I need for a recipe.

Some people will just stick the whole pumpkin in the oven and roast until soft. The reasoning is that it’s easier to cut in half once roasted, especially if you don’t have good knives. However, I don’t prefer this method as I find it harder to remove the seeds. The difference between the stringy bits and the roasted pulp was harder to define once roasted so I lost more of the would-be puree whilst removing seeds and guts as it was all soft and came away with the spoon.

How long will pumpkin puree last?

If you’re keeping it in the fridge, try to use it up within a week. If you freeze it, it should be good for about a year. Though, of course, over time you’ll sacrifice some quality and texture.

Note that you cannot can pumpkin puree. If you have a pressure canner, you can can diced or chunked up pumpkin cubes. But you can’t water bath can it and it can’t already be pureed.

Can you freeze pumpkin puree?

As you may have guessed from my responses above, yes! Dividing it into recipe-sized portions (usually half a cup) and freezing is my preferred method for storing puree. It lasts ages and you can defrost just as much as you need at any one time. Again, I separate into portions on a parchment-lined cookie sheet so I can freeze individually. Then I put everything into a bag and keep it in the freezer.

How do you use homemade pumpkin puree?

In short, anywhere you would use canned pumpkin puree! Certainly use it to make your Thanksgiving pie, pumpkin bread, or cookies.

I love it stirred into oatmeal or pancakes. Or you can make a homemade Pumpkin Spice Latte.

Alright, ready for the recipe card to make your own homemade pumpkin puree? 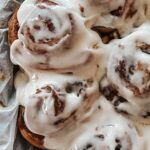 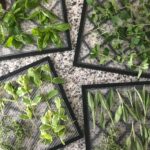 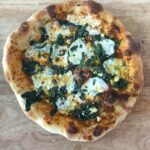 How to Make My Delicious Everyday Sourdough Pizza Crust
Previous Post: « How to Make the Easiest Healthy Applesauce
Next Post: 25 Great Gift Ideas for the Gardener in Your Life »